Lauren Bravo’s new book What Would The Spice Girls Do? is all about nostalgia. So what better follow up to her podcast episode than to find out about the most treasured items in her wardrobe? Not the ones that cost the most money, or that were bought from the coolest places, but the ones which have stories. They are the best of all…

“I get very invested in the emotions of clothes. There are things that I am never going to throw away, even though I’m not going to wear them for, maybe, another 10 years. I think if you hold onto things for long enough, they will come back round again.

“My late Nan had an amazing coat. It’s a faux Persian lamb swing coat; brown with a big blonde leonine collar. It’s very Aslan. I inherited it after she died. We cleared out her house and I took a few bits, but classic me, it’s complete sacrilege, I chopped the bottom off to make it short! Back then, in about 2008, I only ever wore short stuff and couldn’t imagine wearing a long coat. Bloody fashion! But I love it, it’s still very wearable. I’ve never hemmed it, still, but I wear it winter after winter and it gets me loads of compliments. 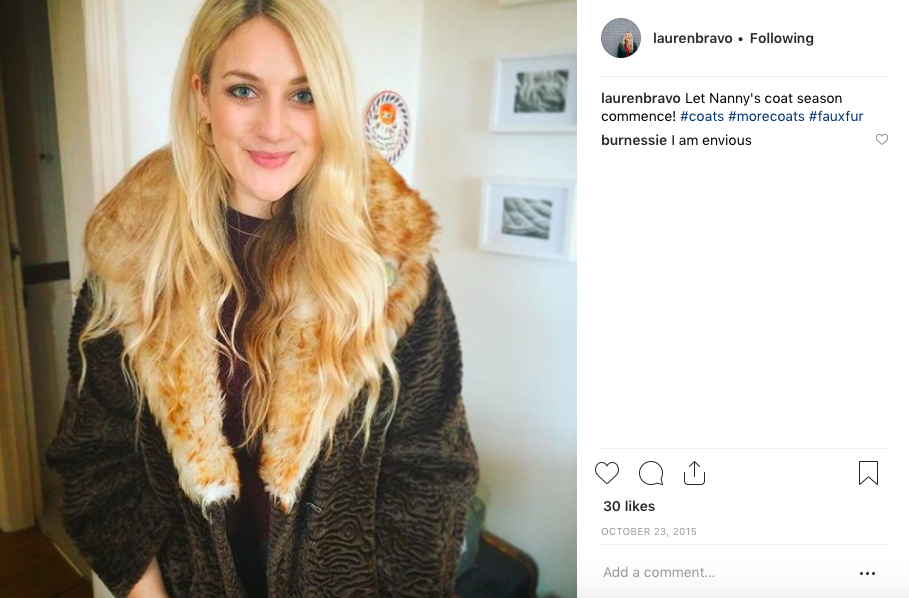 “I also have a lot of dresses that I bought in my first year of uni that were very much my ‘moving to London dresses’. At one point I had 100 vintage dresses in my wardrobe. I’ve got this amazing polka dot 60’s shift dress with a striped collar and a pussy bow. It just absolutely fitted me perfectly and I wore it to all the best nights out. For me, that’s really synonymous in my head with being in London for the first time, being 18 and going out. It’s got massive holes in the arms now because the fabric literally just wore away, but I don’t think I could ever get rid of it.

“So many dresses. Actually, the dress I wore to my Nan’s funeral. It was a bright pink fuchsia wiggle dress which was so inappropriate for a funeral but I just knew that’s what she would have loved me in.

“I’ve got an amazing ring which was my other Grandmother’s 21st birthday present which was made out of the amethyst from her father’s tie pin. She gave me it a few years ago and I wear it a lot. Family things are the ones I will keep forever.”